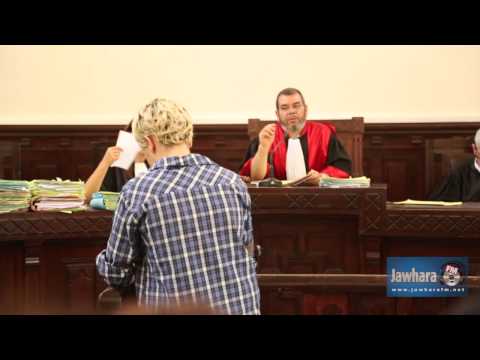 A Tunisian court on Thursday (July 4th) postponed Amina Sboui's appeal verdict or one week, pending more details on a gas canister reportedly seized from the Femen activist during her Kairouan protest.

Amina was originally arrested May 19th after spray-painting a wall near the Kairouan mosque where Ansar al-Sharia planned to hold its congress.

Meanwhile, Amina, who appeared before the court while in detention, refused to wear sifsari, a white Tunisian traditional dress worn by women during trial.

Contrary to rights activists' confirmations that the Tunisian judiciary stresses the need to wear sifsari during public trials, Bochra bel Hadj, a lawyer and women's rights activist, told Magharebia that it was "a procedure used by prison administration only".

She mocked the procedure, saying, "What do men do to hide their faces, since they appear at court in more serious cases?"

Souhieb Bahri, one of Amina's lawyers, said that female defendants in morality cases are forced to wear sifsari.

But eyewitnesses who attended the hearing said that Amina told the judge, "I won't wear sifsari because my case is political, not morality-related."

Lina Ben Mhenni, a member of the support committee known as "Amina Femen", said, "Thanks to Amina's smile as she entered the courtroom, I found myself stronger than ever." The blogger and university professor went on to praise "Amina's patience and courage".

On Wednesday, Amina's defence team held a press conference where they professed the innocence of their client.

"They have detained her in violation of law, and have fabricated malicious charges against her. This is a stark assault on individual freedoms," said Sadek Ben Mhenni, an academic and spokesperson for Amina's defence team.

In her turn, Radhia Nasraoui, a law and rights activist, commented on the charge of belonging to a group aimed at assaulting persons and properties. "Such charges remind me of the charges that Ben Ali's regime used to fabricate against the salafists," she said.

"The goal of this charge is to exact revenge on Amina, and the case doesn't bode well, especially if we know that the investigating judge has a desire to release her, but the public prosecution doesn't intend to do that," Nasraoui added.

If convicted, Amina could face a prison term ranging from five years to 20 years.

Amina's trial sparked much debate on the Tunisian street.

"Why were the three Europeans activists who staged a topless protest opposite the Palais de Justice released while Amina is still detained?" asked Meryam Azizi, a student in her 20s. "Why did those who burned an embassy have their sentence stayed? This is a confusing thing that raises doubts about whether Amina is receiving a political trial," she added.

However, Neila Abdelli, a 25-year old teacher, ridiculed what she said was an exaggerated publicity campaign for "a girl who challenged society and didn't respect our habits and traditions"

"Couldn't she find another way to express her opinion and protest? She is shame on Tunisian women," Abdelli said.

Meanwhile, al-Chorouk daily on July 4th reported that the criminal circuit at the Court of Appeal on Wednesday (July 3rd) decided to provisionally release Salem Abid, a salafist defendant, and to adjourn his case to the end of month.

Abid was previously convicted of making explosives and trying to escape from prison by the 5th criminal circuit at the court of first instance, and was sentenced to 10 years in prison. However, his lawyer insisted on his innocence and on referring his case to the Court Of Appeal.