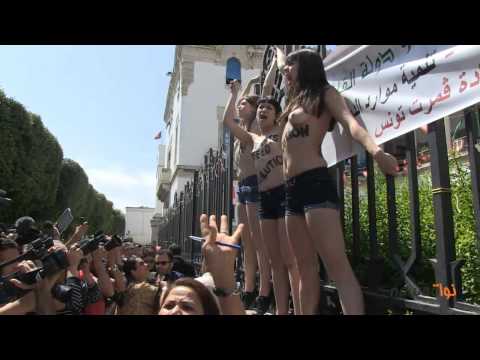 All three Femen protesters have been arrested.

Video of FEMEN Germany and FEMEN France Sextremists prepairing their action for Amina in Tunis:

Yesterday, three members of the feminist activist group Femen staged a topless protest outside the Ministry of Justice in Tunis, Tunisia. They had gathered there to draw international attention to the fact that one of their sister activists, the Tunisian Amina Tyler, could face up to two years in prison for allegedly spray-painting the name of the group on the side of a mosque.

The Femen protesters—two of whom were French, the other German—stood, bare-chested, chanting the slogans "Free Amina!" and "Women's spring is coming!" for a couple of minutes before hauling themselves up onto the gates of the ministry. A few dozen offended onlookers, many of whom were lawyers who worked inside the ministry, tried to cover them up with items of clothing throughout the protest. Their banners, which also read "Free Amina," were torn from their grasp well before the police turned up and dragged them away into the building amid lots of panicked shouting and angry gesticulation.

It is thought to be the first topless feminist protest to ever take place in the Arab world, and is certainly the first carried out by Femen.

"An inquiry has been opened and they will be placed under arrest and brought to trial," justice ministry spokesman Adel Riahi told AFP. He didn't specify what the Femen activists might be charged with, but six journalists who were present at the protest, including reporters from Reuters and Canal+, the French TV network, were also arrested.

I've hung out with Femen quite a lot recently, so I got in touch with founding member Inna Shevchenko to get her take on yesterday's events.

VICE: Hey, Inna. So what's the latest on the aftermath of the protest in Tunis today?
Inna Shevchenko: We know that she is with journalists who were arrested at the same time; journalists from Reuters. They are arrested, but we don’t know which police station they are in exactly. There is now a new calling for them to spend six years in jail for protesting topless in the street. They could also be deported.

Oh, good.
But they can also be deported as foreigners. We don’t know for now. We have no new information apart from that they are arrested. We have had no contact with them. For now, nothing.

You expected this, right?
Yeah, definitely, of course.

What do you think will happen now?
We understand that they can and will be deported. It’s not a decision based on law, but more of a political one, so we don’t know what will happen. I don’t know, but I would say that our official position at the moment is that we are not going to leave Tunisia and we are going to have to be deported.

Amina's trial is tomorrow. Do you have any news on that?
For now, no news. But we know she’s in jail, waiting for tomorrow. But no, nothing.

Do you feel that the action today was successful? Did it go how you hoped?
Yeah. This is something that we planned and it was quite hard because during the last few days we got strange messages, strange calls and strange commands from different people. People who call and try to find out if Femen really was coming to Tunisia. They were giving signs that they were from secret terrorism departments. It was quite difficult to prepare the action and to not get deported beforehand. Tunisia was the first country to start the Arab spring, and now it is the first country for our topless protests. This action is the beginning of a big campaign of the liberation of women.

Do you think you’re being monitored by surveillance groups?
We know that they've broken into our Facebook accounts and website a few times. We understand that they are trying to stop us and that is something like spitting in their face, this action today. We showed them we can do things, so we can show who is more powerful.

Thank you so much.