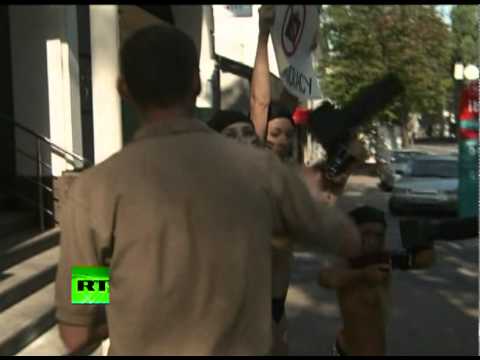 Half-naked political activists have been brutally dispersed by an embassy employee while protesting in Kyiv in support of Georgian photo journalists accused of espionage. A local journalist is reported to have been injured during the dispersal. A group of girls from the Ukrainian FEMEN movement gathered in front of the Georgian embassy in Kyiv on Monday, holding huge fake cameras and posters saying "No pictures - no democracy!"

During the protest, which was meant as part of an international campaign backing the Georgian photo journalists recently arrested on espionage charges, a man emerged from the embassy and attacked first the topless activists, and then one of the journalists who was taking photos of the event. The attacker turned out to be one of the embassy employees.

The correspondent, from the local Komentari newspaper, Aleksandr Yamkovyy, was injured as the embassy employee hit him hard on the head. He was taken to hospital. According to FEMEN activists, the actions taken by the Georgian embassy only prove "the international community's suspicions that official Tbilisi is media-phobic."

"Members of the embassy demonstrated a lack of respect for all democratic values: freedom of speech, freedom of association. Thus we are even more worried about the journalists who were arrested in Georgia," stated the FEMEN activists.

Four Georgian photographers, including a photographer with the presidential administration's press service, Irakly Gedenidze, and his wife Natiya, were charged with espionage on July 9. Natiya Gedenidze was later released on bail. The other detainees are Zurab Kurtsikidze, a representative of the European Press Photo Agency (EPA), and Georgy Abdaladze, a photographer for the Foreign Ministry who was also working with the Associated Press (AP).