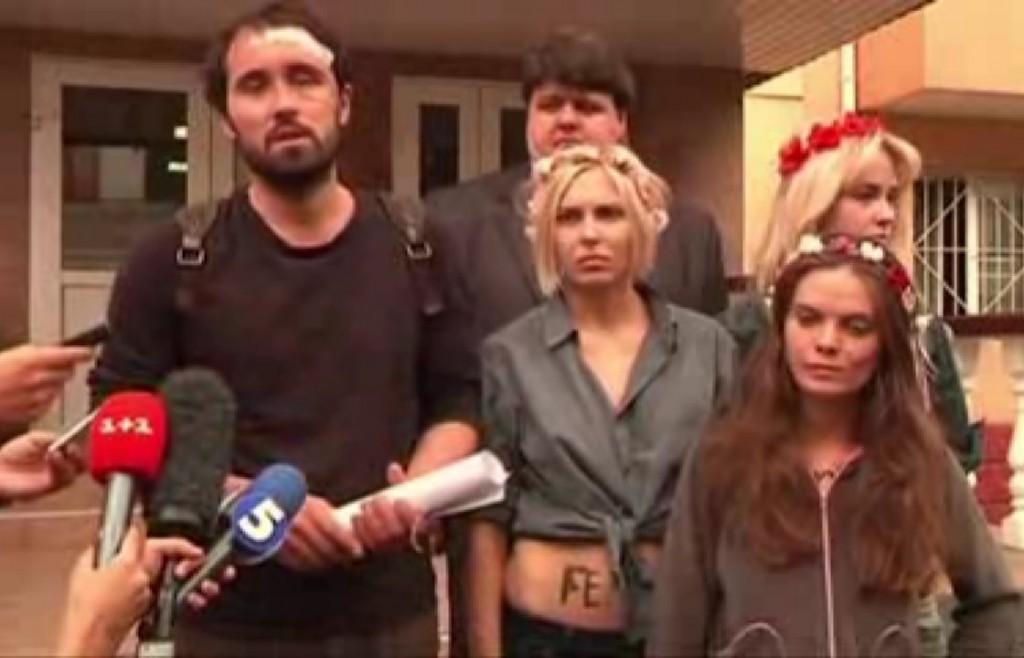 A court in Kyiv fined three activists of Femen, the Ukrainian feminist organization known for its bare-breasted protests, and a Russian photojournalist on Sunday and released them following their Saturday arrest. Femen said that the women had been beaten and kidnapped when they were arrested and that they had been targeted by Ukraine’s security service, the SBU, to prevent protests during a visit to Kyiv by President Vladimir V. Putin of Russia and Patriarch Kirill I of the Russian Orthodox church, who have been accosted by Femen members in the past. Police said that the women, Oksana Shachko, Alexandra Shevchenko, and Yana Zhdanova, were detained by a patrol car after officers spotted them naked and arrested them for “petty hooliganism” after they failed to cover up. The photojournalist, Dmitry Kostyukov, was accused of disobeying police orders. Mr. Kostyukov told the Russian television, on Sunday that all the women had been clothed and that he and they were attacked and beaten by 15 to 20 men in plain clothes as he was photographing the activists outside an apartment building. A police car drove up then to arrest them. “My head, face and back hurt, and I have some dizziness,” Mr. Kostyukov said. “Oksana was hit in the kidneys and the chest.” Sunday’s fines were small, the equivalent of about $10.50 for each woman and just over $16.70 for Mr. Kostyukov, the Interfax-Ukraine news agency reported. Femen’s leader, Anna Hutsol, said she was attacked twice on Saturday, in which her dog was kidnapped and she was beaten in the face.