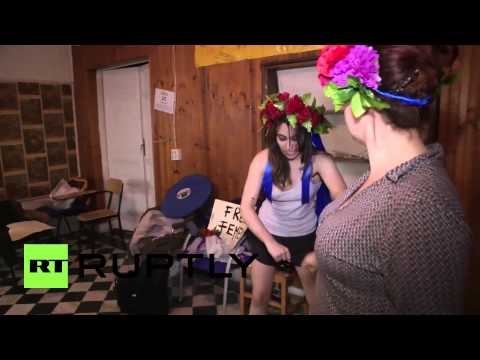 FEMEN Spain organised a training day for new recruits in Madrid on Saturday. The Spanish branch of the globally known feminist network was founded two months ago. Activist learned various protest-techniques and how to respond to a range of situations, including police arrest. The training took place in a squatted building in the centre of the Spanish capital.

Lara Alcazar the leader and co-founder of FEMEN Spain tells that "today we are meeting some girls of the Spanish Femen group for training and to be able to do some actions in the future." To explain why FEMEN activist always protest topless she says "Femen protest is a topless protest because we think that our bodies are a weapon, so nudity or freedome for us, we are going make a naked war."

The arrest of the activist Amina Sboui, known under the pseudonym of Amina Tyler, inspired the girls to establish a Spanish base. Tyler rose to prominence for her online protest in February, when she posted pictures of herself topless with "my body belongs to me" written on her chest, in opposition to the structures of Islamic culture. The 19-year-old feminist has been charged with carrying out "provocative acts" and faces up to two years imprisonment for attempting to stage a topless protest in Tunisia in May. Secondary charges she faces include possession of pepper-spray and vandalism, after writing the word 'Femen' on the cemetery wall next to a mosque. Three other FEMEN members have also since been arrested in Tunisia after protesting topless outside Tunis' main court on May 29 in objection to Tyler's arrest.