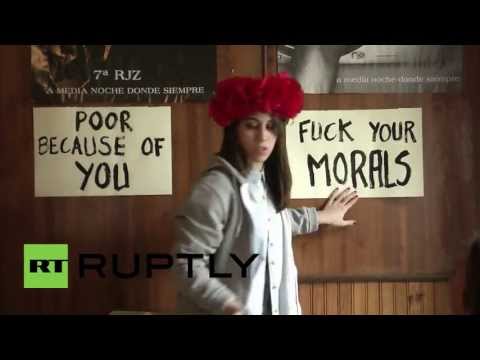 Hopeful activists hold the first meeting of FEMEN Spain to prepare for action in Madrid on Friday. Lara Alcazar and friend Indhira Espinosa started the Spanish branch of the globally known feminist network two months ago. Through activism, Lara a 21 year old student and Indhira, 30 and unemployed, hope to change the role of women in Spanish society with the help of their new recruits.

Global topics are on the groups agenda in addition to domestic goals, much like their counterparts worldwide, as Lara Alcazar explains, "We are fighting against prostitution, all the sex industry. Fighting against the church. We want to disconnect the state from the church and finish with all the religions that are oppressive with women and also fight against dictatorships all over the world."

The arrest of the activist Amina Sboui, known under the pseudonym of Amina Tyler, inspired the girls to establish a Spanish base. Tyler rose to prominence for her online protest in February, when she posted pictures of herself topless with "my body belongs to me" written on her chest, in opposition to the structures of Islamic culture. The 19-year-old feminist, following a second act of protest in May has been charged with carrying out "provocative acts" and faces up to two years imprisonment for attempting to stage a topless protest in Tunisia. Secondary charges she faces include possession of pepper-spray and vandalism, after writing the word 'Femen' on the cemetery wall next to a mosque. Three other FEMEN members have also since been arrested in Tunisia after protesting topless outside Tunis' main court on May 29 in objection to Tyler's arrest.