FEMEN gave Putin and Merkel an eyeful in Hanover: 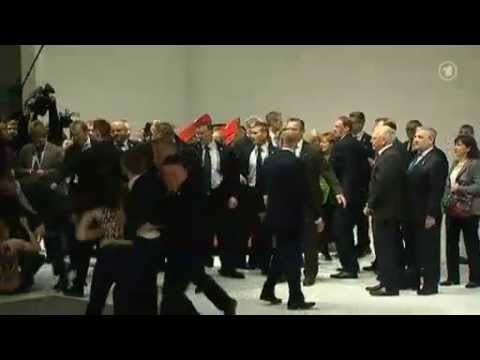 Russian President Vladimir Putin and German Chancellor Angela Merkel came face to face – or face to breast – with naked FEMEN activists as they toured an industrial fair in Hanover on Monday. 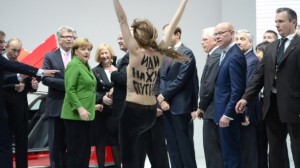 The leaders were taking in a presentation of a new Volkswagen model when the four women started chanting “f… dictator”. The activists had the same words painted in black ink across their chests and were eventually overpowered by security guards.

Merkel and Putin were attending the Hanover Messe in northern Germany, where Russia is this year’s guest country. Photos taken afterwards suggest they saw the funny side of the protest, if not the motivation behind it.

At the event’s inauguration on Sunday evening, Merkel urged Putin to “give a chance” to non-governmental organisations, describing them as a “motor of innovation” while, outside, demonstrators protested a recent Russian crackdown on NGOs that has included raids on their offices. 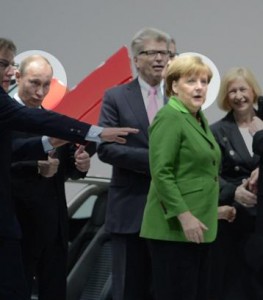 FEMEN is a protest group started in Ukraine in 2008, whose membership has grown to countries across the world. According to its website, its purpose is “sextremism serving to protect women’s rights, democracy watchdogs attacking patriarchy, in all its forms: the dictatorship, the church, the sex industry.”

Last Thursday topless FEMEN activists staged rallies in front of mosques and Tunisian embassies across Europe against what they called an Islamist attack on Arab women’s rights. 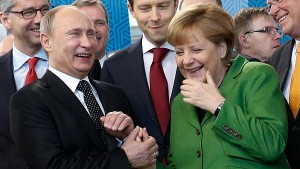 Putin vs Femen, once again: